← Top 10 ways to quickly and easily improve your diet
What Women Who Lift Heavy REALLY Look Like! →

Why blame the red meat? 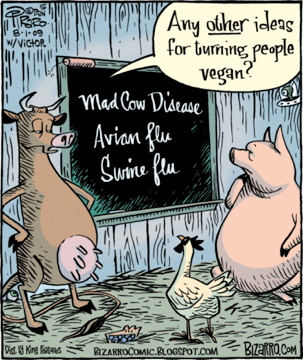 See! It is all a conspiracy!

Seriously, why is everyone so determined to blame red meat for all our health problems? I swear I saw at least 3 stupid sensational news pieces about it today.

Why does everyone look to cut out red meat before processed foods and gluten?

Sorry people, but we ate red meat way before we had all of the diet related health problems that we have now.

It is interesting to note that most studies don’t take into account how many carbs or vegetable oils people consume along with the supposedly dangerous fatty red meat.

Everyone (myself included) will jump on board studies that benefit them! But come on people…take a look at the study. They didn’t look at gluten, processed foods OR vegetable oils. So who says it is the red meat that we’ve been eating since our hunter-gatherer days?

On to the next article I found…

The article starts out by blaming our bad omega-6 to omega-3 ratio on red meat.

Ok…but red meat isn’t the thing highest in omega-6s so why is it being blamed by this article for “diet induced obesity?!!”

Actually the protein highest in omega-6s with the worst ratio is, CHICKEN! And guess what else provides you with way more omega-6s than red meat?

So why is red meat being singled out?

Both of these studies also don’t consider the difference between grass-fed beef and grain-fed beef.

Can I just point out that there is a HUGE difference between the two!!!

Here is a study “A Low-Carbohydrate, Ketogenic Diet versus a Low-Fat Diet to treat Obesity and Hyperlipidemia – A randomized, controlled trial” that compared the effects of a low-fat diet to that of a low-carb diet. The conclusions drawn from this diet were:

I also just want to link out to a guy who has proof coming out of his ears that red meat isn’t the problem – Gary Taubes. Below is a quote from an interview

You have to consider that when I wrote the article I already knew the results of five clinical trials—short term, admittedly—that compared Atkins-like low-carb diets to low-fat, low-calorie diets of the kind recommended by the American Heart Association. Since my article came out, those five studies have been published and they all showed that cholesterol profiles—specifically triglycerides—improved on low-carb diets compared to the AHA diets. So I knew that your uncle’s bacon double cheeseburger for breakfast wouldn’t kill him as long as he remembered to skip the bun.

I also knew that some 30% of Americans—40% over 60, which probably includes your uncle—have Syndrome X/Metabolic Syndrome and, for those people, low-fat diets will do more harm than good. I also knew that long-term studies of low-fat, low-calorie diets showed they were worthless and didn’t lead to long-term weight loss. I also knew that if individuals could lose weight on Atkins or any diet, their cholesterol would drop with the weight, regardless of the diet. Knowing all that, I knew that anyone could try a low-carb diet and it wouldn’t kill them and might actually help them. I had faith that if they somehow gained weight eating all the fat that Atkins recommends, they’d stop the diet. (I’m still mystified by nutritionists and other “experts”, who feel they have to condemn a diet in advance because some individuals might allegedly gain weight. Don’t they think that anyone smart enough to read what they write is also smart enough to stop a diet that doesn’t work for them ?)

← Top 10 ways to quickly and easily improve your diet
What Women Who Lift Heavy REALLY Look Like! →