So on Sunday, I had an EPIC cheat day.

And Monday morning, I was paying for it.

I felt like crap. Congested. Bloated. Upset stomach. And that wasn’t even when I was working out.

But I decided to do a hard metabolic workout any way, hoping it would get my system somewhat back on track – knowing that this workout had brought many a strong woman and man to their knees…and their heads into the bushes.

I’d never had that issue before. The workout was always hard, but it had never made me want to puke before. Honestly, I didn’t fully understand how it made anyone puke…until yesterday.

While I didn’t literally throw up, my cheat day was up in my throat after one round. And it did take about 20 minutes laying on the mats after my workout to begin to feel somewhat human again. 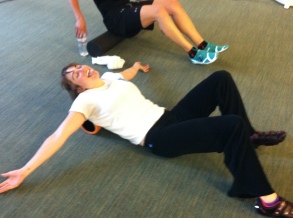 To my credit at least I did more weight than usual and the two-inch rope instead of the inch and a half one, but still….my whole body felt way more ill than it should have.

And really, I don’t think it was the workout. Yea it was a bit harder, but nothing completely ridiculous. And my body was technically fresh and ready to go.

What I think…actually what I KNOW…was the HUGE difference, was the way I FUELED!

We think about our eating habits when it comes to weight loss, weight gain or health but I think all too often we forget to think about how eating affects how we feel during our workouts and even in day-to-day life.

The reason most people either want to puke or not puke for that matter during the workout I did yesterday, has a lot more to do with how they fuel than anything else.

Yes how hard they push themselves is a factor, but fueling can’t be ignored.

Our body is a machine that needs fuel and if you don’t fuel a machine properly, IT WON’T RUN…

Therefore, how do you expect your body to run properly if you aren’t fueling it properly!?!

Yet so many people do!

So if you aren’t feeling so great during your workouts…and if you even feel like you’ve plateaued or gone backwards, you may want to take a look at what you are eating.

The wrong type of fuel, or too much or not enough fuel, may be hindering progress during your workouts (not to mention you may not feel near as great as you could, or have near as much energy as you should, during day-to-day life!).

P.S. Note that I also mentioned UNDER FUELING. It isn’t only over fueling or incorrect fuel that is the problem. If you don’t eat enough, YOU ARE GOING TO HINDER YOUR PROGRESS AND FEEL LIKE CRAP!