Why do I want to turn into a couch potato and stuff my face each and ever year when the cold weather hits? 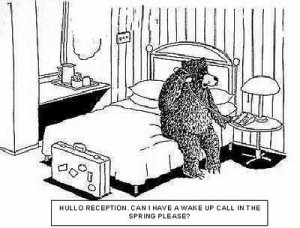 I mean this week, I haven’t been able to control myself – pizza, burritos, Chinese food…pints of ice cream!!! Even Candy and Ryan are having trouble with self-control (and trust me…both of them are WAY better at it than me!).

I’ve joked around in past years that weeks like this are just my body telling me it is time to go into hibernation. I mean each and every year toward the end of the fall (when it first gets cold), I eat… A LOT! AND this  year, I’ve decided humans must have something in them that tells them that they want to hibernate (this week I haven’t been able to control myself even though I’ve told myself numerous times I wouldn’t go on another fall eating binge!).

So here is what I’ve found out about hibernation mode…

State of greatly slowed metabolism and low body temperature in winter in certain  animals. True hibernators include many cold-blooded animals and a few mammals  (e.g., bats, hedgehogs) that go into a near-dead state with a near-freezing body  temperature and very slow breathing and heart rate. Most hibernators build up a reserve of body fat  or store food ahead  of time.

See! I definitely have some of the “symptoms” of hibernation. I go into a near-dead state (aka being a couch potato) and I build up reserves of body fat (aka eating lots of chinese food and ice cream).

So since I have the “symptoms” of hibernation, I decided to do more research.

I googled “lists of animals that hibernate.” Badgers, bats, raccoons and chipmunks were on the list…but no humans and no Coris.

AND I FOUND THIS ARTICLE/POST THING!!!

No, humans cannot hibernate. Hibernation is a complex process involving profound changes in an animal’s physiology, hormonal regulation and metabolism. We humans have lost the ability to perform the entire intricate process of going into, maintaining, and coming out of hibernation. It is interesting to note, though, that some“modules” of the hibernation regulatory chain are still in place in humans.

SEE!! My wanting to sit on the couch and binge eat may have something to do with wanting to hibernate! haha