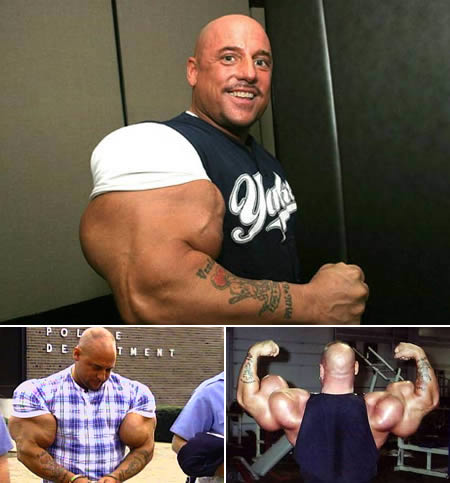 I want to build my bicep...just maybe not that much...

I’m not a big fan of single muscle group movements (Brian on the other hand is…especially bicep curls). I don’t like doing bicep curls or tricep extensions or even overhead presses.

And many trainers will tell you there really isn’t ever a need to do these movements. For one, most compound movements work your arms enough to gain general strength. And two, it is more important for most clients to move their entire bodies and burn more calories, which means that compound movements are much more efficient.

And I do in general agree with those two statements. I rarely have my clients do single muscle group movements.

BUT I do think single muscle group movements are super important if the client trains numerous times a week and if they are really focused on upping their lifts numbers.

And not surprisingly, my bench numbers, have gone up.

Just yesterday I repped out 5 at 105 after already completing 4 sets. Considering that just about a month ago that was my max at the competition, I’d say my numbers have definitely gone up!

So sometimes you do just need to work on building those biceps…or triceps or shoulders. It can really make a difference!