Who gets paid to write this shit? (Excuse the language)

Seriously who the heck pays stupid people to write stupid articles that only serve to further mislead the public about diet and exercise? 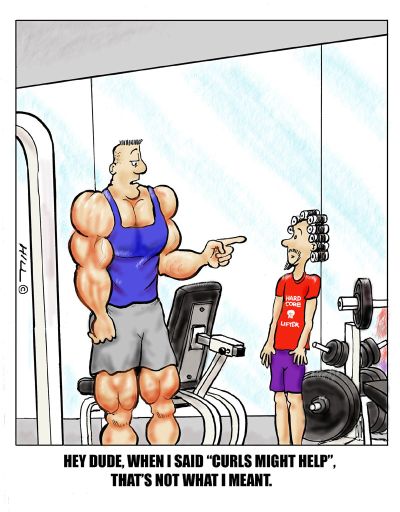 I had another post planned for today, but when Francine posted a link to my wall called “10 Fitness Facts that Everyone Gets Wrong” and said, “OMG WHO WROTE THIS? THEY SHOULD BE JAILED,” I felt the need to read and RANT about it.

I first started reading the article and thought, “Ok I don’t like how this guy words stuff, but I see his point.”

I mean, no you don’t have to train hard to see your abs. You can have the strongest abs in the world, but if you eat too much and store excess fat, you will never see them. Dieting really is key to getting six-pack abs.

I also saw his point about the point of exercising NOT being about burning calories. Exercise should be used to get in better physical shape. Diet is truly at least 80% of the weight loss battle.

But that is where my agreement with him ended and my temper rose exponentially.

He next claims that “weightlifting is an effective fat loss strategy” is false. He says that it pales in comparison to cardio when it comes to calorie burn.

Here is a link (Fat Loss Wars: Cardio vs. Weight Training) about how good weightlifting is for fat loss (this article also disproves a few of his other points). Even his own site refutes him. I found another article on Askmen.com called “Weightlifting for Fat Loss” that states:

Choosing to abandon your weight-lifting program when it’s time to cut fat is one of the biggest mistakes you can make, so be sure you don’t commit this progress-damaging error.

Below are a few points from his article that I would also like to dispute:

I can literally rant all day about how awful this article is. No wonder a majority of our population is so confused about what is right when it comes to diet and exercise!
Ok one last thing… why is there no author listed with credentials? Hmmm…
Thank you Francine for encouraging this wonderful rant! 🙂

Posted in Benefits of doing "man" exercises, Conventional Wisdom - How I hate you, Uhm?