It’s Never Too Late – Becoming a Beast at Any Age

I have many older adults that come to train with me who think that certain exercises, activities that they even used to do, are now out of reach….I find it is especially common among women.

But that simply isn’t the case.

Even as we age, our bodies are capable of so much more than we give them credit for.

It is about not being intimidated and believing you CAN do it.

And for women, especially older women who may feel like there are things they can no longer do, the physical fitness realm can be intimidating, which doesn’t make becoming a beast very easy.

Heck I’m sure many of you have experienced the dread and fear of walking into a busy weight room. I know I’ve seen it on many of the faces of women I train (before of course I win them over with my great sense of humor…just kidding…sort of…)

Thinking about the gym I work in now, I could see how some of my older women are at first intimidated.

They walk in and there are professional MMA fighters and crazy people running around sweating and grunting. There are chains and tires and sledge hammers as well as other stuff that doesn’t even look like gym equipment lining the walls.

They see people doing handstands and swinging around gigantic kettlebells. And everyone is sweating profusely. (hey we don’t have air conditioning…there are very few people who don’t sweat even without air conditioning…I do know a few…but not many!)

Sometimes it just looks crazy. And there seems to be a lot of stuff going on that looks impossible to do. (And once the first shock is over, most of my older adults, especially the women, love the craziness, but that initial shock can truly intimidate.)

But they aren’t impossible.

And the only reason I mention handstands is because that is one of those exercises that many women see and turn to me and say, “I can’t do that.”

I always respond the same thing, “Well have you tried to do one?”

The answer is always, without a doubt, “NO.”

So they haven’t tried one, but there is no way they are going to be able to do one.

And somewhere along the line, they decided there is an age limit to handstands. (Even after all those videos of the 86-year-old gymnast!)

But doing a handstand, or any exercise like it, is truly all about confidence.

But you would be amazed at the number of women who haven’t lifted that much and haven’t ever really done handstands that can do the second, or even third, level of the handstand progression on their first or second day.

And the best thing EVER is that look in their eyes when they are amazed at the fact that they can walk their feet up the wall and hold a true handstand.

It is all about confidence.

If we don’t believe we can do something, we aren’t ever going to attempt it.

We aren’t ever going to give ourselves a shot.

Yes, our bodies change as we age, but that doesn’t mean that all of a sudden we are restricted from doing a ton of things!

Aging doesn’t mean we have to accept immobility and pain. Aging can still mean running and playing! Heck, there are grandchildren to chase after!

There is no cap on improving your physical fitness. Aging doesn’t have to mean going downhill.

You can become a beast at any age and take on a ton of new physical challenges. I’ve seen it happen. 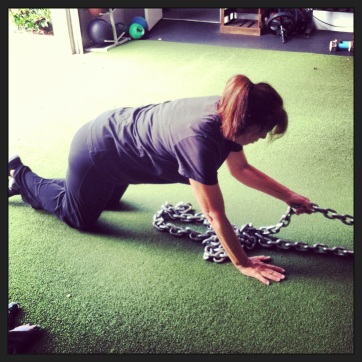 I bet you if you asked them if they’d ever be able to do something like that, they would have told you NO.

Or what about the woman who came in and lost over 50lbs and regained her ability to do cartwheels after not having done one since high school?

Just because you aren’t a beast right now, doesn’t mean you can’t become one.

Give yourself a chance.

Tell yourself you CAN DO IT and start training today.

Age doesn’t have to mean we are limited! We can be beasts at any age!

If you have discovered your beastliness later in your life, share your story! Comment below and help inspire others to pursue their own “beastliness!”

Posted on July 14, 2013, in Mindset, Show me yours and tagged confidence, fitness at any age, fitness for older adults, mindset, train like an athlete. Bookmark the permalink. 11 Comments.